Why should I paint dead fish, onions and beer glasses?
Girls are so much prettier.
~ Marie Laurencin
Happy Top Five Friday! Today we take a look at Dante Gabriel Rossetti, the founder [along with William Holman Hunt and John Everett Millais] of the Pre-Raphaelite Brotherhood.  Rossetti was not only a prolific painter, but a poet as well, writing some and is known as much for his romantic entanglements with his two major muses: Elizabeth Siddal and Jane Morris [wife of William Morris] as his art.
If you want to learn more about Rossetti, I suggest two sites: The Rossetti Archive and The Victorian Web.   And now to the paintings.  It was very difficult to whittle the list down to five!
Venus Verticordia (1864-68) ,

Knowing my penchant for strong colouring and contrasts, it is not difficult to see why I picked Venus as one of the top five.  The beautiful realism of the Pre-Raphaelites’ technique is one of the main draws for me, as well as the medieval and romantic subject matter.  The model here was actually two women: Fanny Cornworth and later on, Alexa Wilding.
Proserpine (1874) Tate Gallery,
Proserpine [or Persephone in Greek mythology], is the daughter of Zeus and Demeter ~ the goddess of harvest.  In the myth, she is kidnapped by the love-stricken Hades to the underworld.  Demeter searches in vain for her daughter and during her search, causes a long drought to fall on the people.  Zeus the orders Hades to release Proserpine.  In an uncanny resemblance to Genesis’ Eve, Hades tricks her into eating forbidden fruit ~ in this case, pomegranate seeds, because it is said that whomever eats or drinks anything while in the Underworld must remain there for all eternity.  In some versions, Proserpine eats four to six seeds, the number of dry months when nothing grows and she must return to the Underworld.
Again, rich hues and realism make this an easy choice.  Jane Morris is the muse here and Rossetti penned a sonnet of longing to go with the painting:
Dire fruit, which, tasted once, must thrall me here.
Afar those skies from this Tartarean grey
The irony here is that Jane Morris was trapped in an unhappy marriage to William Morris and both she and Rossetti were tasting the forbidden fruit of an adulterous affair.
Il Ramoscello (1865) ,
I have not been able to find much about this painting but the model appears to be Rossetti’s first muse, Elizabeth Siddal.  They married in 1860 and she died sometime in 1862 after an apparent overdose of laudanum.
I love the colour and detail of her dress and the coppery sheen of her hair ~ a feature was known for.
Lady Lilith (1868) ,
From the Victorian Web:
(Lilith). . .is Rossetti's femme fatal, seducing young men with her feminine whiles and then tossing them off. In the poem she casts her "spell through him, and left his straight neck bent; And round his heart one strangling golden hair." Lilith's beauty is fatal. He who falls for the corporeal sensuality that Lilith represents is doomed.
The model was neither Jane nor Elizabeth, but a third Rossetti muse, Fanny Cornforth. However, in this rendition, the face is that of Alexa Wilding.  Lilith may be a femme fatale, but the colouring and sensuality depicted is beautiful and showcases Rossetti’s obsession with the Pre-Raphaelite ideal woman with long, flowing hair.
Astarte Syriaca (1877)
Rossetti depicts Jane Morris here as a strong and sensual Venus, with again, the long, flowing hair.  There is an air of mystery and darkness, and one can almost feel the intense longing of painter and muse for each other.
What strikes you about these paintings?  What do they say to you?  Any other Rossetti favorites and why?

*Update 10/10/11: Donald Halliday, a tour guide from the Russell-Cotes Museum in Bournemouth read my post and wrote to let me know that the model for Venus Verticordia was not Jane Morris as I thought, but Fanny Cornforth and Alexa Wilding.  The correction has been made.

His note:
"The original model was in Rossetti’s own words ‘”A very large young woman, almost a giantess, I noticed in the street”. Later Rossetti modified the features for that of two of his favourite models. The first was Fanny Cornforth; then later – Alexa Wilding
Rossetti discovered Alexa (Alice) Wilding by chance when he was walking to the Arundel Club one day in the spring of 1865. Seeing her walking next to him, he was struck with her beauty and asked her on the spot to sit for him as a model. She said she would do it if her mother consented. Shortly afterwards, she wrote that her mother agreed. They made an appointment but, much to Rossetti’s disappointment, she did not keep it.
Some few months later he saw her again by chance in the street, stopped her, and offered her generous terms if she would sit for him. She agreed and gave up her dressmaking job. Rossetti retained her at a pound per week to sit for him whenever he asked.
Wilding made such a good model for Rossetti’s later work he said “she has a lovely face, beautifully moulded in every feature, full of quiet, soft, almost mystical repose. She sat like the Sphinx waiting to be questioned with a vague reply in return”
Wilding became one of Rossetti’s favourite models and sat for some of his most famous pictures, including Mona Vanna and The Blessed Damozel. Besides the studies he made for such major oil works, Rossetti executed at least seven separate drawings of her between 1866 and 1873."

Many thanks to Daniel for letting me [and you!] know.  I do as much research as I can, but I don't always catch everything, so I love it when readers let me when something's amiss. ~ MD
Posted by Unknown at 6:23 PM

Most Popular Drops of Ink

Friends Far and Near

May is Mental Health Month

Being a Wordsmith - Link Up

"It took all the strength I had not to fall apart!" 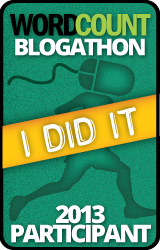